I am a masters student studying human rights in London and earlier in the year, I interned with Most Mira for three months. Throughout that time, I heard so much about Kevljani, the surrounding towns, and the politics that shape the the region. I saw countless photos of the soon to be community centre, currently a ruined building, and past photos of what the village was like. But photos and stories cannot articulate the reality of the area. 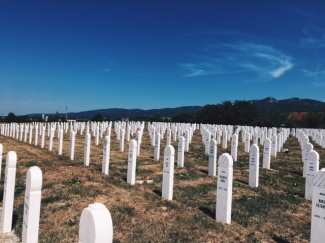 What struck me first and foremost was the landscape. A beautiful, “pretty village” of corn fields and flat land surrounded by the Kozara mountains. But upon visiting memorials, mass graves, and cemeteries, I realized that even the landscape was political. At the Shahid cemetery in Kozarac, standing next to the mosque I looked around the vast field of headstones and at the end stood an Orthodox church. I realized looking across the landscape that if you can see a mosque minaret, you can nearly always see a steeple of a church in the same panorama. And that defined the politics for me – two communities living in the closest proximity to each other, sharing the countryside, and yet living completely segregated. The war is still so ingrained upon people’s memories because every where you look there is a constant reminder of the conflict. It is not easy to see why it’s so difficult to shake off.

Upon discovering that only 5% of the village now live here permanently, I began to observe the architecture of the houses. One of the other participants, Azra, pointed out to me that the houses are all built by diaspora who fled in the 1990s and have rebuilt their homes with the architecture inspired by their diaspora countries. The buildings reflect the diversity of the community; walking down one street, you pass houses that are built modeling Swedish, German, and Australian architecture. Alongside those houses are the ruins of former homes, representing the history of the village; it was destroyed and now 95% of the population are not there permanently. How can a community move on from the war when there are symbols and reminders of the conflict all around you?